The Minister of Foreign Affairs and Member of Parliament for Anyaa-Sowutuom, Shirley Ayorkor Botchwey has said she did not mean to disrespect the Creative Art Industry following her comment at a campaign rally at Ayawaso West Wougon where she said “Parliament is a very serious business, it’s a serious place”

She said her statement was directed at Lydia Alhassan’s contender, John Dumelo and not an attack to the Creative Arts Industry.

“If you mistakenly vote for John Dumelo instead of Lydia Alhassan, you’ll always be watching movies at the movie theatre,” Ayorkor Botchwey added.

This comment didn’t go down well for the people in the Creative Art Industry as some actors criticized her comments.

But responding to this in a press statement Ayorkor Botchwey indicated that any attempt to twist her words should be treated as contempt as she was only referring to John Dumelo.

“It was never meant to be an attack on a particular person or the entire film making and Creative Arts industry.”

“Any desperate attempts by the political opportunists to twist and portray this as a swipe an entire industry should be treated with the contempt it deserves,” portions of her statement read.

Below is the full statement 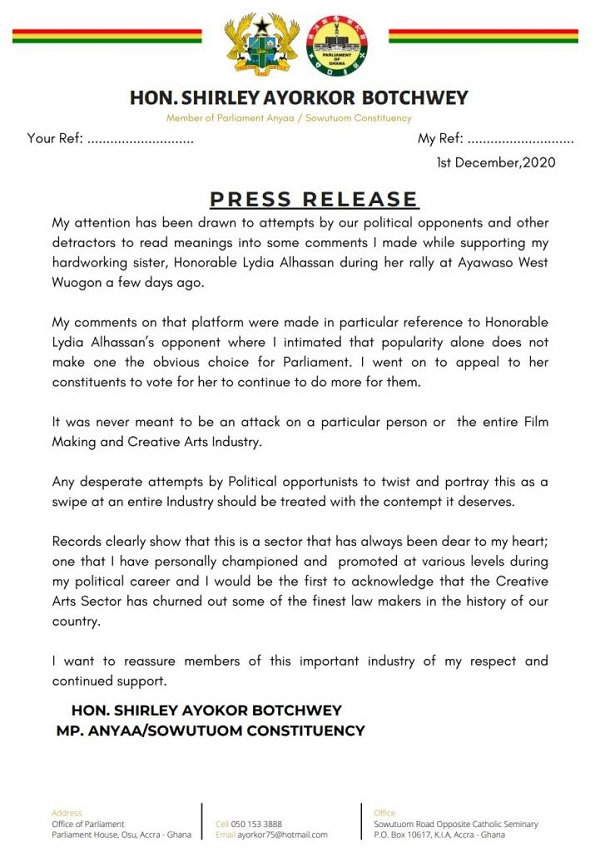 KWADASO CONSTITUENCY EXTENDS WARMEST FELICITATIONS TO DR OWUSU AFRIYIE AKOTO Indeed, you are a proof that good things come to those who are willing to...
Read more
Local News

KWADASO CONSTITUENCY EXTENDS WARMEST FELICITATIONS TO DR OWUSU AFRIYIE AKOTO Indeed, you are a proof that good things come to those who are willing to...
Read more
- Advertisement -